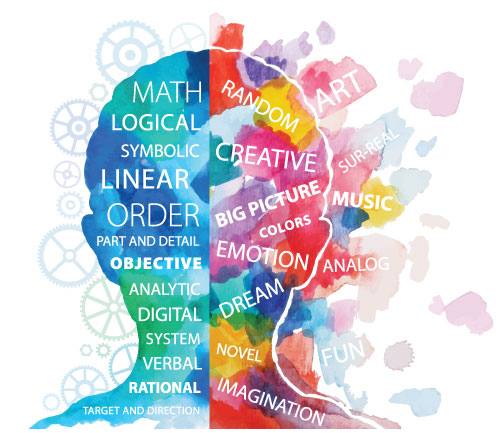 Brain Fact: The two sides of the brain are intricately co-dependent

This myth holds that a right-brain person is generally creative, intuitive, artsy, while a left-brain person is more of a problem-solver, more linear, logical. The myth arose from genuine science, but new imaging technology has shown that the brain is more interdependent than once thought.

The myth probably took root in the 1800s, when scientists discovered that an injury to one side of the brain often caused a loss of specific abilities. For example, spatial abilities seemed to reside in the right side of the brain, with language in the left. The myth gained ground in the 1960s, when scientists studied epilepsy patients who had surgery to sever the connection between the two hemispheres. These researchers showed that when they couldn’t communicate, the two sides of the brain could be unaware of one another—and even respond differently to stimuli. For example, when one patient was asked what he wanted to do, his left brain responded with “draftsman” but his right brain with “automobile racer.”

But more recently, brain scan technology has revealed that the hemispheres’ roles are not quite so cut-and-dried as once thought. The two hemispheres are in fact highly complementary. For example, language processing, once believed to be left- hemisphere-only, is now understood to take place in both hemispheres: the left side processes grammar and pronunciation while the right processes intonation. Similarly, experiments have shown that the right hemisphere does not work in isolation with regard to spatial ability: the right hemisphere seems to deal with a general sense of space, while the left hemisphere deals with objects in specific locations.